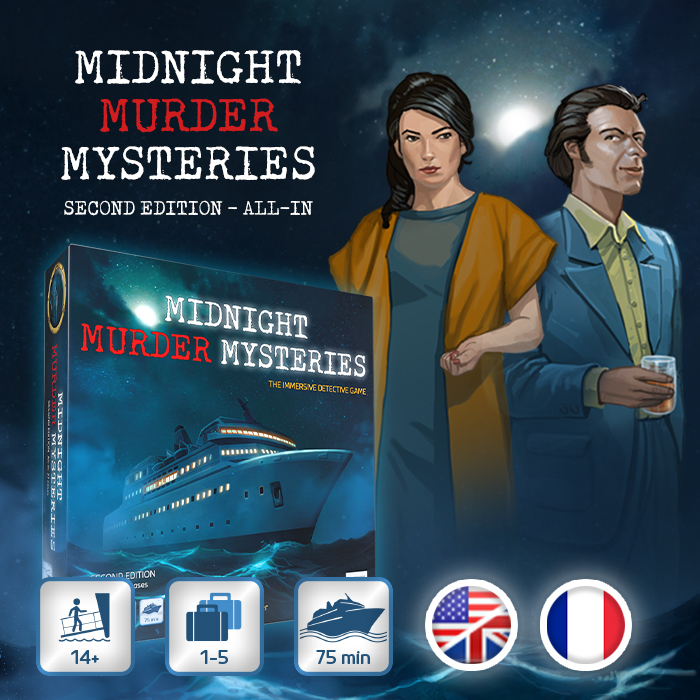 We are currently working on its edition: production is now over, and shipping has begun.

Midnight Murder Mysteries: a story-based crime investigation game aboard a cruise ship.
For 1 to 5 players, for ages 14 and up.

Midnight: time of the murder!

Aboard the Majestic, the lifeless body of a passenger has been found in their luxury suite… You are attending a conference on board with other private detectives, and place a wager to reconstruct the circumstances of the alleged crime before the ship arrives at the port!

WHO IS THE MURDERER? WHAT WAS THEIR MOTIVE? HOW DID THE VICTIM DIE?
DISCOVER THE STORY PIECE BY PIECE AND TRY TO UNDERSTAND WHAT HAPPENED…

In each of the 27 unique cases, you can interrogate 12 suspects on 3 conversation topics and search for clues at 24 locations on various decks. With 60 possible paths to follow in each case, you won’t have time to explore them all, so try to be efficient in your investigations!

In Midnight Murder Mysteries, each case can be played Competitive, Cooperative, or even Solo! When you start a game, choose how you’ll be playing this time:
1. In Competitive mode (2-5 players), players compete to solve the case and decide if their information is made public or not.
2. In Cooperative mode (2-5 players), players investigate on their own, but share their findings when they reach conclusions.
3. In Solo mode (1-2 players), the player competes with a crew member to solve the case.

Common assumptions for all the cases

The body was discovered in the luxury suite. The suspicious death occurred the day before, between 11:45 p.m. and midnight. The culprit acted alone and is the only person capable of lying. The culprit is one of the 12 suspects unless it was an accident or a suicide.

Major improvements have been made since the very popular French 1st Edition published in 2017: a better and extended gameplay, some graphical design changes, etc.

The cases are completely independent of one another. Even though they have identical first names in all of the cases, the suspects are never the same people.

Even when other passengers and staff members (with the exception of the Purser) aren’t physically represented on the game board, they are still considered to be on the ship and might appear in location descriptions and testimonies, or on Event cards. 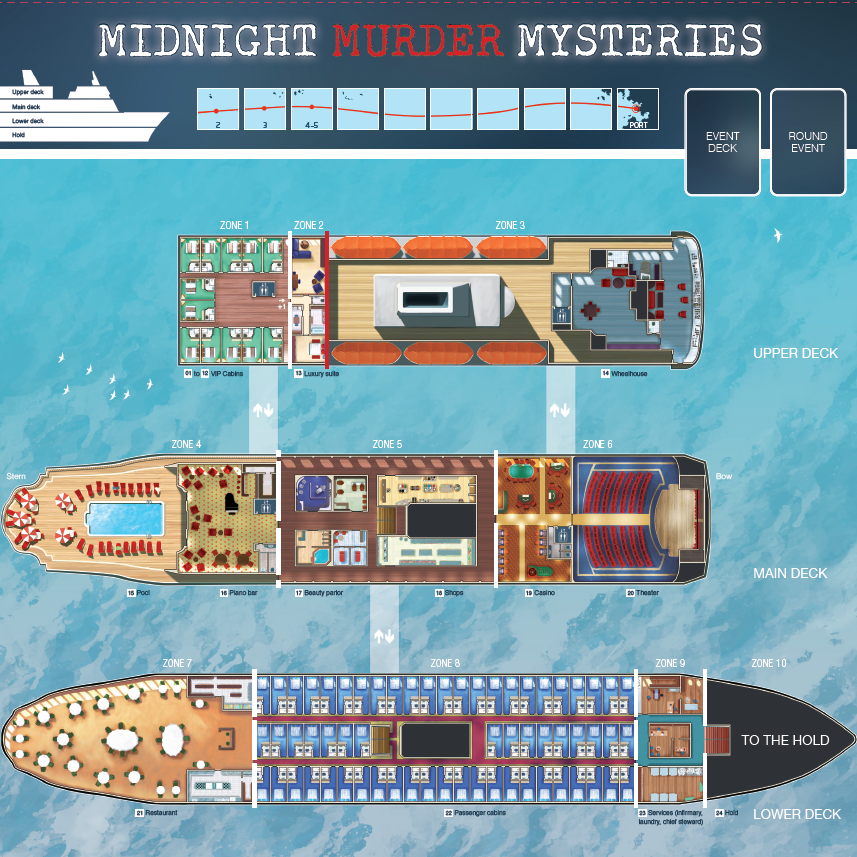 At the end of the setup, choose a case from one of the case booklets and read its presentation out loud and embark on a new mystery adventure…

At the start of the round, just before their action phase, the First Player draws the first card from the Event deck and places the Purser in the zone designated by the number on the Event card. The Purser prevents the detectives from investigating the zone he is in but doesn’t influence the detectives’ movement.

The First Player then reads this round’s event out loud: the effect is immediate & only applies to the current round.

On your turn, you have 3 action points to spend (you can spend more action points if you got Buoy tokens). You can use them as you please to take the actions described below. When you choose the Investigate action, publicly or privately, you get to read the corresponding paragraph in the case booklet.

When you investigate publicly, read the paragraph out loud. When you investigate privately, after taking a look at the paragraph, announce to the other players whether you want to “keep it to yourself” (by reading it silently) or “make it public” (by reading it out loud). If the paragraph remains private, other players check off the corresponding box on the left side of their Notebook; if it was made public, all players draw a horizontal line across the boxes. 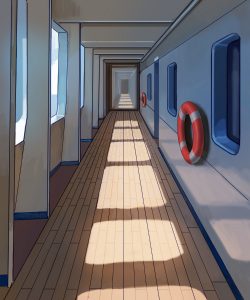 Players are not allowed to divulge any information about paragraphs that they obtained, nor to comment on them. Players are allowed to advise each other on how to conduct their investigation.

After reading a paragraph and before noting down useful information, the active player shares their opinion on how useful the path is to the investigation. The active player is not allowed to speak but must use one of the following 3 gestures (they can first get the attention of the other players by saying “Opinion: …”). The other players write down this opinion in the corresponding box of their deduction sheets using the corresponding symbol (+, /, -). 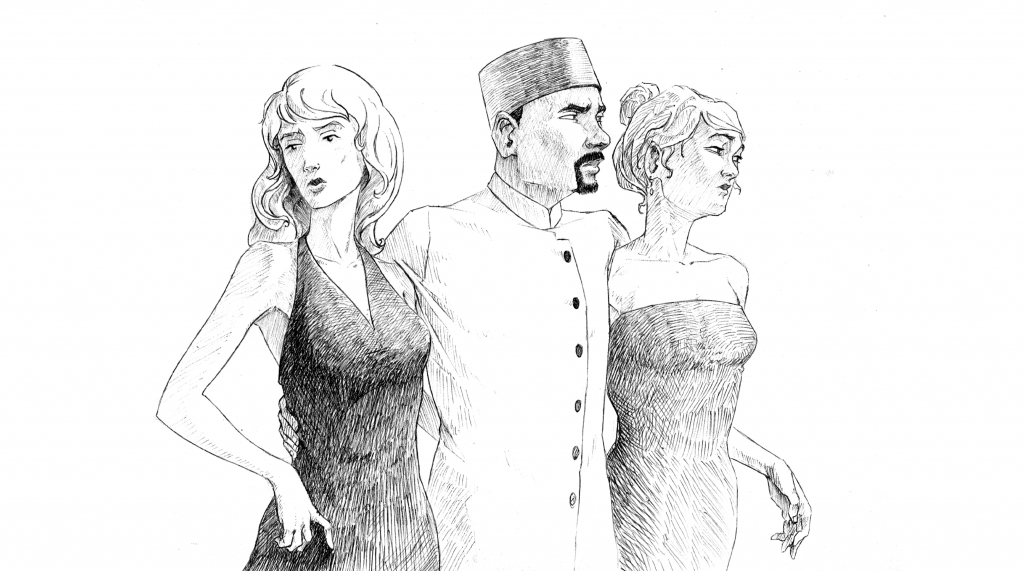 After spending your action points, you may move one (and only one) Suspect pawn of your choice 1 or 2 zones for free, following the movement rules. Place the Last Moved Suspect token underneath the moved Suspect pawn, which indicates the next suspect to be moved this way has to be a different one. No more than 4 suspects are allowed to be in the same zone at the same moment. Suspects can’t be moved into the luxury suite.

End of the case

A case can end in two ways: Arrival at the port or Revelations.

Arrival at the port

If the Ship pawn reaches the final space on the progression Track (the port), the detectives immediately cease their investigations. However, the players can decide to take one final game turn if they all agree to do so.

If a player’s detective is in zone 6 at the end of their turn and they think they’ve discovered the three case elements, they may trigger the end of the case during any given round. They simply announce “I want to reveal my findings” at the end of their turn. Nevertheless, the players finish the current round up and until the player sitting to the right of the First Player, so that everyone has had an equal amount of turns. The other players don’t need to reach zone 6 during this turn. 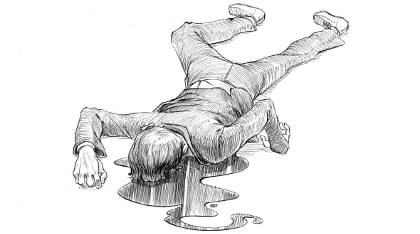 At the end of any round, if the players think they’ve solved the case and they all agree, they may decide to end the case. It doesn’t matter where their detectives are and where the Ship pawn is on its Track.

Ending the case by arriving at the port
The players write down their hypotheses 1 and 2 simultaneously and in secret on their Deduction sheets.  Starting with the First Player and going clockwise, everyone announces their three answers for hypothesis 1.

Ending the case by making Revelations

The player who triggered the end of the game writes down their deductions first and reads their hypothesis 1 out loud, without explaining their choices. The other players may not react to this information at this point. After listening to the hypothesis, they simultaneously and secretly write down their own hypotheses 1 and 2 on their Deduction sheets. When everyone has finished, the players announce their own hypothesis 1 in clockwise order.

All players review their notes. Then, they deliberate: each player may freely explain their theory, share information and contribute details to the case. Finally, all players choose their response to each of the 3 case elements together: the First Player notes down the conclusions on their Deduction sheet under hypothesis 1, as well as the alternative choices for each of the 3 elements of the case (hypothesis 2). 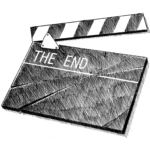 One of the players reads the entire solution of the case out loud. Now it’s time to calculate the scores. In Competitive mode, the players each add up their points for the answers they got right: they do this for both hypothesis 1 and hypothesis 2 (provided the answers are different). The player with the highest total score wins the game and is declared the finest sleuth on board!  In Cooperative mode, the final score determines how well the team has performed!

For the fun and for the points: goals of the game

The official goal is to achieve the highest score. But scoring points isn’t the core element of the game. The most exciting parts lie in discovering the story piece by piece and in trying to understand what happened. Ultimately, you’re aiming to avoid the wrong paths and gather and interpret the puzzle pieces the best you can!

Preview and How to Play by Love 2 Hate

Solo Playthrough by Boardgames with Niramas

Game preview by BoardGameGeek at FIJ 2020 in Cannes